You enter the town through the central 16th-century Porta Romana and continue along Via della Repubblica, where large sections of the Roman pavement are visible. Right on the left, turn into Via Farrattini, where you can admire the beautiful Palazzo Farrattini, a miniature copy of Palazzo Farnese in Rome. Commissioned from Antonio da Sangallo il Giovane in the second half of the 16th century, Palazzo Farrattini, elegant in its typically austere Renaissance simplicity, is considered one of Sangallo’s finest early works. It currently houses a historical residence. Returning to Via della Repubblica, on the left is the Chiesa dell’Ospedaletto, now the Santa Firmina Cultural Centre. The small church, with its adjoining oratory, was part of a hospital complex for the poor, and contains a fresco of the Sienese school “Mary with Child and Angels”.

From here, turn right into Piazza Augusto Vera, where you will see the beautiful façade of the Church of St Francis, built in 1287, to which the convent of the Friars Minor was annexed in the 16th century. The church façade, with its double-wheel rose window, dates back to 1401. The interior, remodelled in the Baroque style, contains, in the chapel on the right, the valuable funerary monuments of Matteo and Elisabetta Geraldini sculpted by Agostino di Duccio. Next to the church is the Chiostro San Francesco, which gives access to Amelia’s Archaeological Museum and Art Gallery. Housed in the former Boccarini College, the Museum displays archaeological material found in the area: a vast archaeological collection, inscriptions, sculptures, architectural elements and sarcophagi. The Museum is divided into thematic itineraries that provide an in-depth reconstruction of various aspects of the ancient city. The main attraction of the Museum is undoubtedly the bronze statue of Germanicus, more than two metres high, a valuable work of art from the first century AD, found in 1963 in Amelia and returned to the Museum after a long restoration. The statue, of outstanding quality, depicts the young Roman general Nero Claudius Drusus, known as Germanicus, as a victorious general; the decorated armour is particularly valuable. The Art Gallery section contains works of local origin dating from the 16th to the 18th century. The valuable paintings housed in this section include the panel painting of “Sant’Antonio Abate” by Piermatteo d’Amelia, an Amelia artist who was among the greatest of the Umbrian Renaissance. The Museum now houses a section displaying some of the finds from the rich Hellenistic necropolis discovered at the former Consortium in Via delle Rimembranze in Amelia. 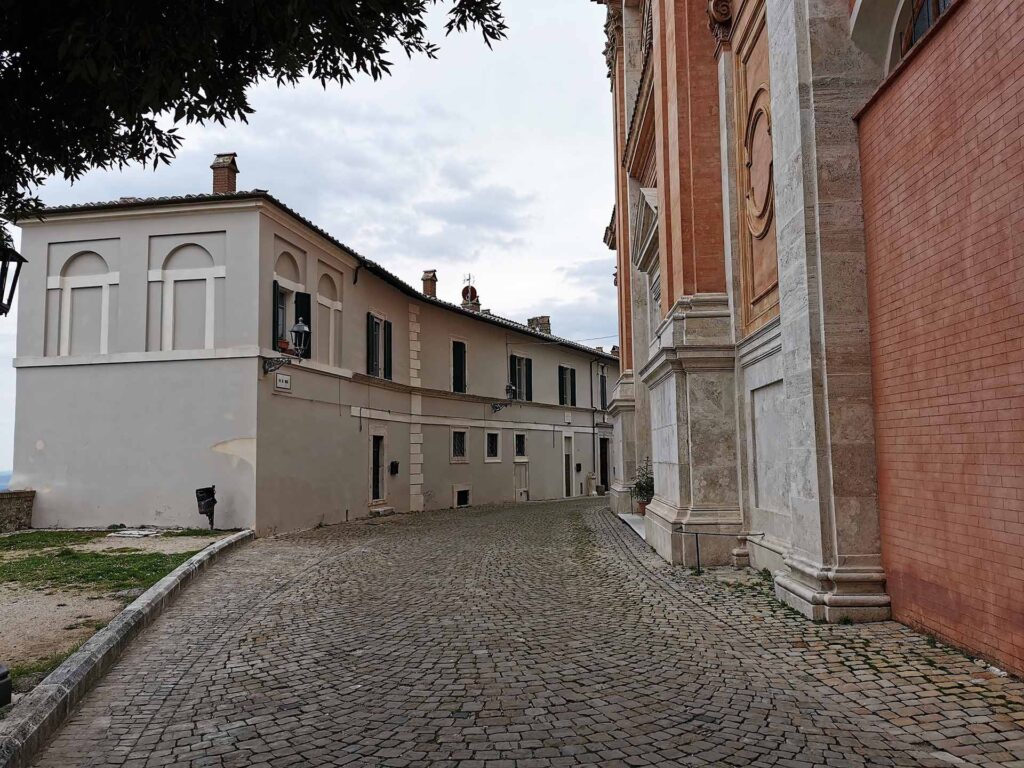 Nearby is Palazzo Venturelli, renovated in the 16th century, whose interior rooms contain frescoes and paintings. In the underground rooms, there are Roman mosaics consisting of black and white tesserae forming geometric designs and stylised floral motifs, which may have belonged to a “domus” dating back to the first half of the second century AD.

Continuing uphill along Via della Repubblica, you reach Croce di Borgo, where the four main streets of the historic centre meet.

Going uphill, you come to Piazza Catena, which has a herringbone brick pavement and an 18th-century travertine portico. The Arco di Piazza that leads into Piazza Marconi is a cubic gate that, in ancient times, delimited the highest part of the city, the arce, surrounded by walls. A staircase leads up to the Loggia del Banditore, a medieval tribune from where the herald announced edicts. Palazzo Petrignani and Palazzo Nacci overlook the square, divided by Via del Duomo.

The Sala dello Zodiaco (Hall of the Zodiac) stands out because of the twelve lunettes painted at the base of the vault and representing the months of the year with their zodiac signs.

Palazzo Nacci is a 15th century building that was built by reuniting previous medieval constructions. On Via Pellegrino Carleni is the entrance to the palace, which has an important ogival portal. Following the plain Via Garibaldi, turn left into Via del Teatro, where you will find the Teatro Sociale (1792), which was a model for the famous “La Fenice” theatre in Venice. The Amerino theatre, with three tiers of boxes and a gallery, is one of the rare remaining examples of an 18th-century theatre made entirely of wood, from the structures to the stage mechanisms, which are still perfectly functional. It has two curtains, the famous one depicting Federico Barbarossa’s siege of Amelia by Domenico Bruschi (1880). Continuing on, you come to the former Church of Sant’Angelo, now a restored complex. From here, a few steps lead to Porta della Valle, with a magnificent view of the Amerino landscape below. Turning back, you reach Piazza Matteotti, where the Town Hall stands. Opposite, down below the square, are the Roman Cisterns, a rare example of a hydraulic structure that were built around the second half of the second century AD.

The Cisterns are ten large underground rooms used to collect water for the city’s water supply and can be visited with a guide.

The majestic Roman Cisterns of Amelia were built when the centre became a Roman municipality and therefore characterised by all those urban elements typical of the work of “Romanisation”: road system, city forum, public and private buildings, water supply system. 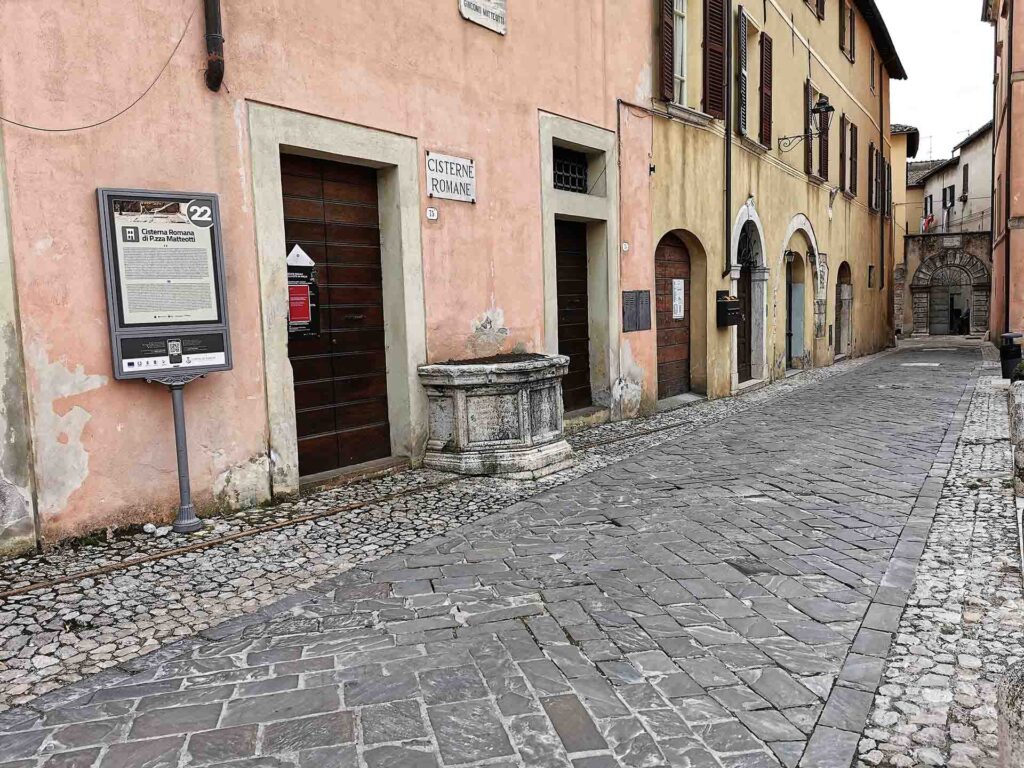 In Piazza del Duomo stand the Cathedral and the Civic Tower, the Bishop’s Palace and the former Seminary. The Civic Tower, the city’s emblem, is more than 30 metres high and was built by the people of Amelia, who formed a free commune around 1050. It has twelve sides symbolising the 12 months and the 12 apostles.

The Cathedral, built on Romanesque foundations, was rebuilt between 1640 and 1680, after a fire had almost entirely destroyed it. Inside, in the shape of a Latin cross, in the oratory of the sacrament are two paintings attributed to Pomarancio depicting the martyrdom of St Fermina and St Olympias. The second chapel on the right bears two banners snatched from the Turks during the Battle of Lepanto; inside the octagonal chapel is an altarpiece depicting the Madonna and Child with St Bartholomew by Taddeo Zuccari (16th century).

Inside the cathedral, you can visit a remarkable permanent artistic nativity scene by the famous Amerino crib painter Carlo Chiappafreddo (1914/1967).

Then you reach the Romanesque-Gothic church of Sant’Agostino (13th century) with an interesting façade and inside, paintings from the 17th century, a valuable organ made by Moretti in 1841 and a fine wooden choir.

If you go down Via Posterola, you will see the Monastery of San Magno, of the Benedictine cloistered nuns, on the left. This small church houses the precious Organ of San Magno, dated 1680, the only one in the world with a double keyboard, perfectly restored.

The city of Amelia has seven historical organs, some of which are still perfectly working. Down to Porta Posterola, an old customs post, you can admire a suggestive view of the Rio Grande valley, with the dam known as “La Para” from the 13th century. From Porta Posterola, you exit and walk along the picturesque Via Luciano Lama to Porta Leone VI. It is said that this access to the city was commissioned by Pope Leo IV, who also restored the walls in the 9th century. The street bearing the same name that opens up after the gate was, since ancient times, the street of the craftsmen’s workshops: blacksmiths, carpenters, master coopers, coal merchants, farriers, bread bakers and taverns.