Next to the church is the former convent of the Franciscan friars. At the beginning of the sixteenth century, under the direction of Fra Egidio Delfini (General Order of Friars Minor native of Amelia, remembered by an inscription above the entrance portal), was built inside a cloister which is accessed from the square. The cloister is formed by a quadriporticus adorned with frescoed lunettes surmounted by an upper loggia; the arches of the two overlapping orders are each supported by sixteen marble columns ending at the top with fine carved capitals. At the center is a pretty well that still retains the original wellhead of the 16th century.

This harmonious spot is one of the most delightful in the whole complex. After the Unification of Italy (1861), the convent was expropriated by the Italian State and transformed into the famous Boccarini College, previously housed in another monastery: the former institution had been founded in 1601 with a donation fund defined in his testament by Flavio Boccarini, a religious minister who was the personal secretary of Pope Gregorio XIII and canon of St. Peter’s Basilica, from whom the college took the name. The college was entrusted to Salesians Fathers of Don Bosco in 1932 whilst in 2001 the ancient Franciscan convent was intended to house a multifunctional complex in which the Archaeological Museum, the Municipal Gallery, the Public Library, some exhibition rooms and a Conference Hall were housed. Archaeological Museum and Municipal Gallery “Edilberto Rosa”.

The archaeological collection on display from the ground floor to the second floor provides a chronologically complete overview of the history of Amelia. Numerous objects covering thirteen centuries of local history (belonging to some private collections or coming from the excavations in the Necropoli of the Ex Consorzio Agrario) were added to the original nucleus consisting of inscriptions and architectural elements collected during the excavations of the town and its suburbs that date back to the first decades of the 19th Century. Above all, on the first floor stands a magnificent bronze statue of Germanicus (1st century AD). It is the result of a chance find in 1963 when works were being carried out not far from the great walls of Amelia. The statue was in pieces but has been carefully restored and now, after a period during which it was exhibited in the National Archaeological Museum of Perugia, pays homage to the city where it was discovered, moreover underlined by a recent multimedia setup and audio-visual equipment. This sculpture, just slightly larger than life-size, portrays the young Roman general (died in Syria on his return from a military campaign, in 19 A.D.) wearing a richly decorated armor.

The figure is holding a spear in his left hand, whilst his right hand is raised in the symbolic gesture of addressing the army. For this reason the bronze probably stood in the campus of the Roman Town, in other words the area set aside for the local youth to do their physical and military exercises. One large room on the second floor has been set to house the Municipal Gallery. It consists for most part of 15th-18th Century paintings originating from churches in the town and its surroundings, for example the altarpiece by an anonymous follower of Piermatteo d’Amelia (about 1495-1500), works by Livio Agresti (Crucifixion with Saints Firmina and Olympias, dated 1557, probably coming from the Cathedral), Giacinto Gimignani (St. Michael defeating the Devil, 1677), Circle of Sebastiano Conca (The conversion of St. Jerome Emiliani, post 1767) and a portrait gallery of illustrious citizens of Amelia. On the first floor, a monographic room has been dedicated to Piermatteo d’Amelia (1445/48 – about 1506): the wood panel here exhibited, dated about 1474-75, represents St. Anthony the Hermit.

The provenance of the painting is from the Church of St. John the Baptist, raised beside one of the various Franciscan monasteries diffused in the Amelia area. 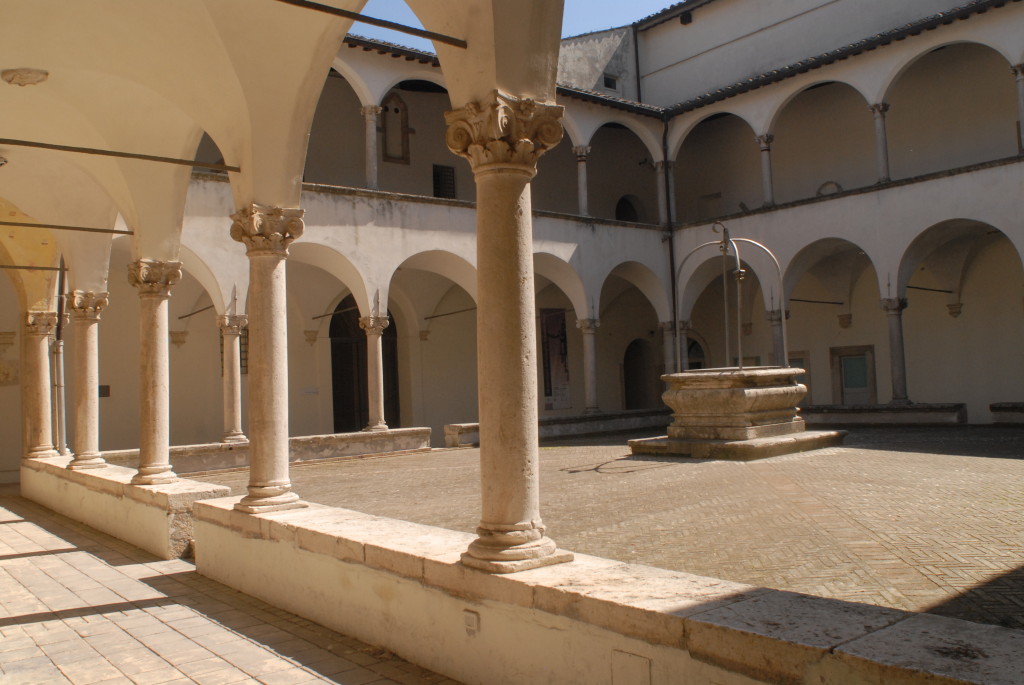