The ancient city walls are one of the most impressive monuments in pre-modern Amelia. From the study of conserved segments it was to determine that an area of about 20 acres were enclosed by the walls. The sections of the town walls that have been preserved through the centuries, surviving wars, integrated with refurbishments and partially reinforced in late Antiquity and the Middle Ages, were built originally with two different building techniques: polygonal limestone and square work classic travertine.

The walls have an irregular system, shaped according to the topography and adapted to the different exposure with the external territory, that characterizes the northern and southern edges: on the more exposed sides, the S, SE, and SW, they extend thick and massive; on the North they are modeled around a natural defense system which is already capable of providing protection, made up of steep walls that overlook the Rio Grande. At the N, NE, NO they climb up until the overhangs and included in their circuit the highest peaks of the hill: the hill on which stands today’s hospital in the North, while South-East of it lies the hill of the stronghold, where the Duomo now stands. Scholars have different opinions about the timeline of the walls, placing their construction between the late fourth century and the third century B.C. In any case, the erection or reinforcement of the walls fits the prevailing tendencies at the time when the cities of central Italy progressively entered the political orbit of Rome. A substantial part of the walls of Amelia, probably the ones built in polygonal style, which surrounded the southern part, may have been built after the mid-third century BC, coinciding with the city’s first urban planning, in patterns typical of the Romanization era. In this era, the Umbrian city assumed the typical features of Roman colonies: a well-defined perimeter enclosing the urban area, within which the public and private spaces were differentiated and punctuated by a regular system per strigas, or with geometric blocks, separated by highways and byways that crossed at right angles to each other.

The most discontinuous part occurs along the northern slopes, which are steeper and inaccessible. According to recent studies, square piece travertine walls could be identified on the north-eastern parts, which seem embedded at the base of the medieval fortifications. Parts of the polygonal limestone walls are now incorporated in the cellars of houses, surrounding walls of gardens, and at the base of buildings. On the north-western stretch conventionally designated with the letter A (via della Valle), the accuracy of execution is inferior. On the eastern section an ancient gap opened where Porta Leone IV now stands. The most significant part of the walls in polygonal limestone III manner winds along the slopes S, SE, SW of the urban area (section B): perhaps erected in conjunction with the opening of the Via Amerina, these were able, in this age of incipient Romanization, of providing a fifth prestigious and impressive landmark view for merchants and travelers who flocked to the city from Rome. On the south-west (section C) a segment of different building technique is attributed to a refurbishment at the time of Pope Leo IV (847-855), made with the smaller sized Carnelian blocks: the attribution to this pope was possible thanks to information contained in the Liber Pontificalis (CV, 82). In this same area, a stretch of the ancient fortifications are of uncertain technique and date back to a refurbishment, probably implemented between the end of the second and the first half of the first century BC, and are now incorporated in the medieval fortifications.

Some ancient openings had to open up along the walls, alongside newer entries: on the north-western side the medieval Porta della Valle; Porta Posterola belongs to the same period and opens on the NE side; two ancient entries on the eastern side consist of Porta Leone IV and a second opening, brought to light by a bombing during the Second World War (cd. Porta del Sole); on the south-west a sixth entry was recently brought to light, with s full round arch, which is coeval with the construction of the polygonal masonry. But the main city entry opened south towards Rome, on the current site of Porta Romana. In Roman times the Via Amerina came through this opening into the city, constituting the cardo maximus of the urban center. 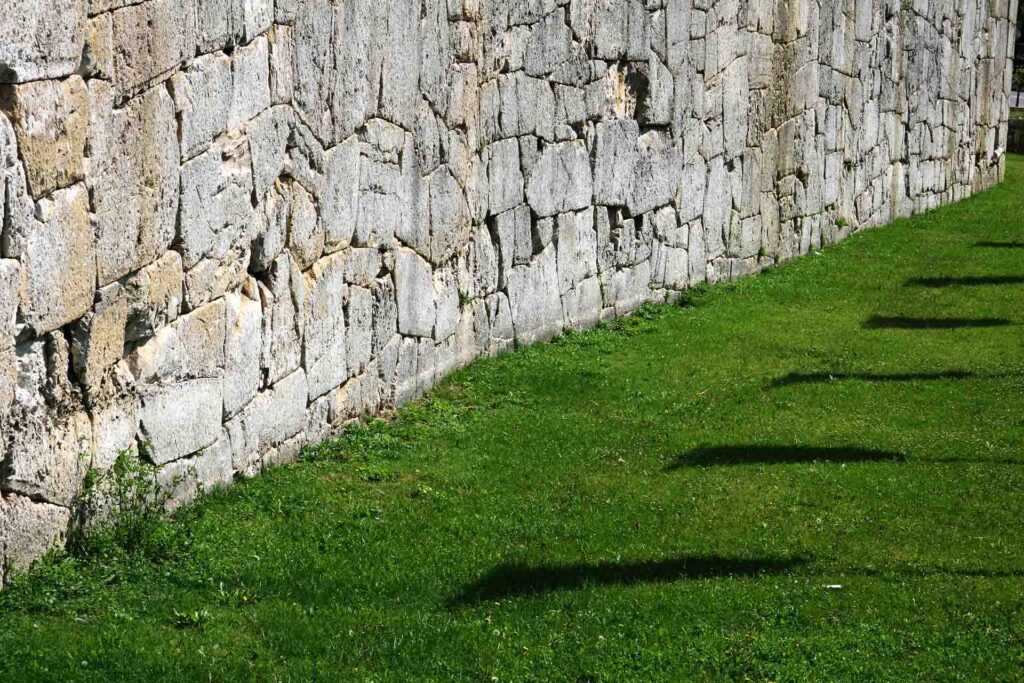 Close to the Gate of the Valley, there should be the most ancient city narrow passage which directly led to the pre-Roman Age Acropolis. The archaic entrance has disappeared since the ancient city Walls were inner to the Medieval Walls and so they were certainly demolished. An imposing section remains and it is characterized by enormous irregular stone blocks from which they take the name megalithic (from greek mégas = big and lithos = stone).

This city walls section is situated by few tens meters from the Medieval Gate on the corner of two streets, Via della Valle and Via Piacenti. Above and along the megalithic walls stood out in the Middle Ages tower-houses of Guelph and Ghibelline families with the typical “doors of the dead” (one example of which can still be seen on the facade of Palazzo Nacci in piazza Marconi) and the stone buttresses.